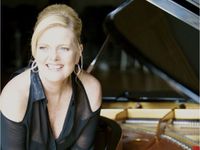 CAROL WELSMAN is an internationally acclaimed singer and pianist whose expressive vocal styling and dynamic stage presence have captivated audiences around the world. She is a 6 time Juno Award Nominee (Canadian Grammy). Carol’s 11 th album, Alone Together was released worldwide in the fall of 2015, and it is receiving rave reviews! Her 12 th Album “This is Carol” 20 Love Songs was released on Muzak Records in Japan in October 2016, and will be released worldwide in May 2017. Alone Together is a collection of jazz classics, including tunes written by jazz greats such as DukeEllington and McCoy Tyner. Carol’s unique interpretations breathe new life into the music, this time featuring an all acoustic traditional sound. Carol is the granddaughter of Frank S. Welsman, founder and first conductor of the Toronto Symphony Orchestra, a “Distinguished Alumnus” of Berklee College of Music in Boston, and in 2010, Carol’s Peggy Lee Tribute CD was voted Top 5 Album of the Year (all genres) in USA Today. She is fluent in English, French, Italian and Spanish.

In “Alone Together,” her eleventh album, the briskly rhythmic swing of Carol's piano playing, the warm, embracing sound of her voice, combined with her irresistible way with a lyric, brightly illuminate her rising ascendency to the upper levels of the contemporary jazz vocal world. - Don Heckman, The International Review of Music

Saturdays @ Vibrato is the centerpiece of the Vibrato supper club experience. We present a carefully curated evening in which customers enjoy five-star American cuisine alongside classic jazz. We handpick the finest instrumentalists and vocalists to create a celebration of a era when Sunset Strip rooms like the Ciro’s, The Mocambo, and Café Trocadero were the epitome of hip Hollywood elegance and nightlife.